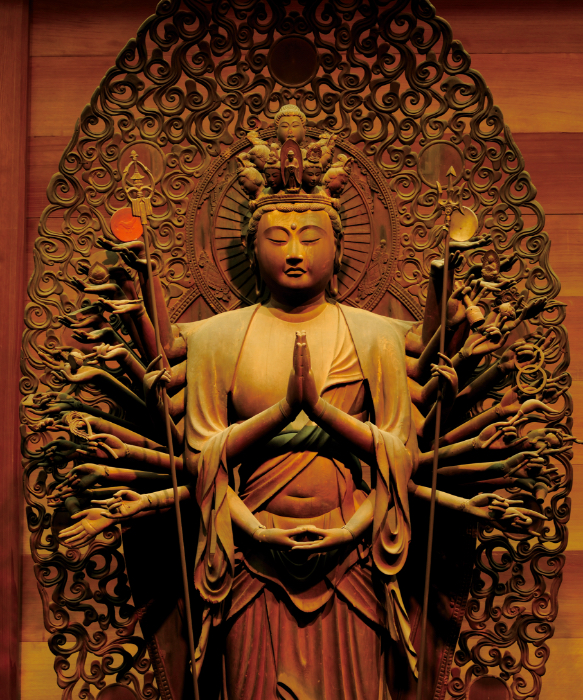 The beautiful form of Buddhist images lies in the faint shades of escape from and attraction to earthly desires summed up in Buddhism. Standing in prayer before such monumental works of beauty, doubtless acts like a time machine, sending worshippers back in time to imbue them with the same thoughts about Buddhism as the people who first worshipped in front of such artistic images.

We can all enjoy Buddhist images at various temples – yet, with each type of image comes different meanings via poses and the accoutrements held. For instance, a Nyorai image (statue) portrays the enlightened Buddha, featuring coiled ringlets of hair and simplicity in clothing. Whereas, a Bodhisattva statue portrays an image of Buddha on the way to enlightenment. Thus, the various forms of Buddhahood work to redeem and save people. Is the statue before your eyes a well-dressed, bejewelled one reminding us of Buddha’s background as a prince of royalty, or one of the other numerous Bosatsu, such as Kannon, Jizo, Monju, Fugen or Kokuzo, of which Kannon Bosatsu (the Buddhist deity of compassion) is the Sanjuusan Kannon, taking on 33 guises to save the masses?
Statues of Myoo, the Wisdom King, strike a pose of indignation, shouldering an inferno of flames, all of which is said to encourage toward goodness people who are leaning toward a path of evil. Daikaku-ji Temple has fine examples of these five Wisdom Kings, the first in Japan to be worshipped. Also, there are Tenbu deities from India and surrounding areas who has been incorporated into Buddhism, and also come in distinguished and warrior-like forms. Brahma, Shakra, Sri-mahedevi, Benzaiten, Gigeiten, Kishimojin and Daikokuten are examples of distinction. Whereas, Shitenno (Four Heavenly Kings, like Bishamonten), Niou (Two Deva Kings, like Kongorikishi), Idaten, Jinja Daisho, Hachibushu, Junishinsho and Nijuhachibushu are all examples of warriors. These deities are noted for their human forms and facial expressions, making them more accessible to the public, with a notable example of Tobatsu Bishamonten, the guardian of Heian-kyo, on display at To-ji Temple. The depiction of light emanating from the backs of some Buddhist statues is to express how the light of Buddhism reaches all crevices of the three realms of existence.
The beauty of a Buddhist statue is an expression of the Land of Perfect Bliss (Gokurakujodo) – hence, the carving of such sculptures was the task of the very best sculptors, who strove to produce perfect forms. Such works come in various materials, such as woods, metals, stones, clays and lacquer. Yet, all of them express the Perfect Bliss not found in this world. In this way, Buddhist images reflect the craving we all have for happiness.