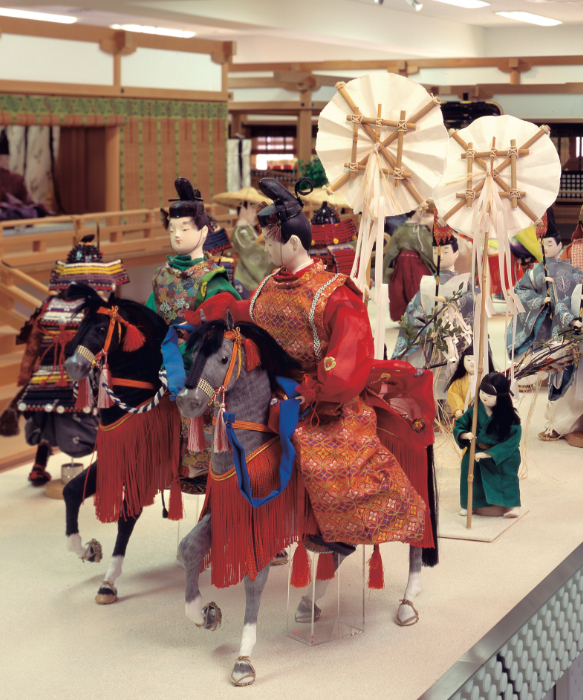 The spirit of locals past and present lives on in festivals dating back centuries or well over a millennium – an unchanging festival throb chiming today and chiming long ago. Whether it be prayers to rid plague or bring bumper crops, the devotions of our ancestors are always with us.

Kyoto’s three major festivals – Aoi-matsuri, Gion-matsuri and Jidai-matsuri – are truly mobile museums! Floats, garments and accoutrements adorned with the latest technology of the eras represented in each festival offer an uncommon feast of beauty. Not only the eyes but also the ears get to feast on delights, with unearthly rhythms from flutes and gongs filling the festive air.
The Aoi-matsuri started as festival rites by an oracle to pray for crops at a time when wind and rain were ruining everything in the reign of Emperor Kimmei (539-571). Back then, it involved a procession between Kamigamo-jinja and Shimogamo-jinja shrines, becoming a national event during the Heian period. And, nowadays, the procession winds its way from Gosho (the Imperial Palace) to Shimogamo-jinja and then on to Kamigamo-jinja on May 15, annually. Participants in traditional costumes are adorned with hollyhock and katsura tree sprigs. Women lead the procession, with the principle lady, or Saio-dai carried on a palanquin. The procession is fully redolent of Heian times, often being referred to as a moving “dynastic picture scroll”.
The Gion-matsuri dates back to 869, when 66 halberds, or hoko, were erected in Shinsen-en Temple to represent the 66 states in Japan at the time, as a festive ceremony to combat a plague ravaging Kyoto and the rest of Japan, which was believed to be a curse of the deity Gozu Tenno. And, then with time, the halberds became adornments incorporated on giant floats called “hoko”, with naginataboko being the top float that leads the first procession, or saki-matsuri. The other 32 floats are split between first and second processions for parading duty. Even from early times, neighborhoods that own the floats were incredibly competitive about the decorations on their floats, leading them to acquire European tapestries in the 16th century, the works of famous artists in throughout the Edo period and the works of modern artists today, making the Gion-matsuri a moving art gallery.
The Jidai-matsuri commenced in 1895 as a procession of worship for Heian-jingu Shrine, which had been built to worship Emperor Kammu and commemorate the 1100th anniversary of the capital moving to Kyoto. The festival is managed by an organization formed by local citizens. Currently, there are 20 eras represented from Enryaku through to the restoration, with local districts in the city taking responsibility for given eras. Everything, from apparel, vehicles and decorations, is a faithful reproduction of the original, with even the sewing method altered to match the method of each era – time-honored craftsmanship handed down from generation to generation, showing the kind of festival and detail Kyoto thrives on!